The Future of Cities with David Crombie 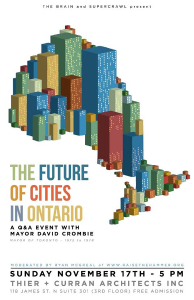 The Brain and Supercrawl present The Future of Cities in Ontario, a Q&A event with David Crombie, mayor of Toronto from 1972 to 1978.

HAMILTON, ON – November 13, 2013 – The reconstruction work has now been completed on the Queen Street Hill (Beckett Drive) and crews will reopen the access to traffic by 1:00 p.m. today.

The project involved road reconstruction, new retaining walls, drainage improvements and the widening of the sidewalk at the top of the hill near the escarpment stairs.  Safety measures were also implemented as part of this project.  Lane widths were adjusted to address speed mitigation and centreline rumble strips were installed.  The access also features new energy-efficient LED street lighting.

“We know the project and closure caused headaches for commuters and we want to sincerely thank the community and all the neighbours surrounding the job site for their patience as the contractor completed this project,” said Gary Moore, Director of Engineering Services with the City of Hamilton.  “We are very pleased with the end result and look forward to enjoying the long-term benefits of this reconstructed access.”