Posted on May 23, 2017 by Durand Neighbourhood Association

In case you missed it, about 75 Duranders filled the auditorium in the old Football Hall of Fame on Wednesday, May 17.  We were joined by Rad Vucicevich, Nick Rassenti (IBI), Stephanie Kwast and Ken Chen who presented their proposal for two point towers of 27 and 29 storeys onthe site bordered by Bold, Duke, MacNab and Park.  Medallion is in the very early stages of the plan, and have the following steps to take:

The projected timeline is 18 months to four years.  The reps from Medallion answered many questions from residents, but did not have firm plans for some important questions from current residents of the apartments, including: Where/when is replacement housing for current tenants planned?  Will current tenants have priority in the new buildings?  What will rent levels be in the new buildings?

For other residents of Durand, increased traffic was the top item of concern, despite assurances that tenants of these buildings will not need cars due to proximity to HSR and GO transit.

Medallion has promised to keep the lines of communication open through the Durand Neighbourhood Association.  We will send out updates through this blog.

Thank you for continuing to engage on matters that are important to this neighbourhood and our neighbours.

13-15 Inglewood approved for Designation by HMHC and moving to Planning and then Council.

Durand Built Heritage is moving to Planning and then Council.

Work is underway at St Marks.

June 3 is the day for 100-in-1-Day initiatives throughout the city and globally (see poster below).  In Durand, Chris Redmond of Durand Coffee is organizing a clean-up of Durand Park and alleyways throughout Durand.  Meet at the coffee shop at 9:30 a.m. on June 3 to get started with some hot delicious beverages and maps, then we’ll set out and pick up all trash and litter we can find in Durand Park and all over the neighbourhood. (Bags and gloves will be provided.)   It’s a fun way to meet your neighbours and spiff up the neighbourhood at the same time.   Here is the link for our event:  Click

If you have an idea for other 100-in-1-Day projects, Register  100in1day.ca/hamilton or tour the action taking place all across the city on June 3! 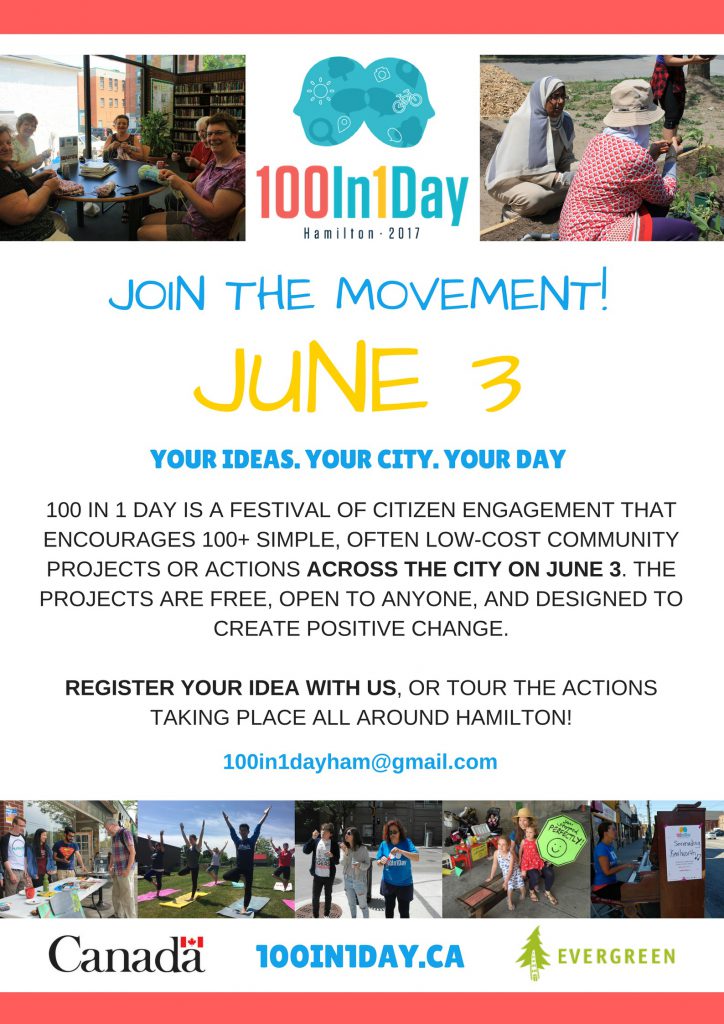 Reminder – Town Hall on May 17
Plans for Saturday? Join your neighbours!