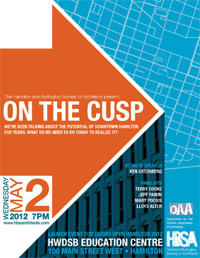 ON THE CUSP: We’ve have been talking about the potential of Downtown Hamilton for years. What do we need to do today to realize it?

Things have improved significantly since the Hamilton and Burlington Society of Architects first focused on the crisis in downtown Hamilton in 1996. We have seen the rebirth of James Street North as an arts district, the Lister Block has been restored and downtown has become a generator of new jobs. In spite of this many of the concerns evident in 1996 are still with us. The neighbourhoods of the lower city still have a declining population, competing city’s downtowns seem to be getting more private investment, we are still losing heritage buildings and our infrastructure deficit is still growing as we build new at the suburban fringe.

What do we need to do today as citizens, business and government to ensure our city will reach its potential by 2026? What happens if we don’t?

Ken Greenberg, architect, urban designer and recognized expert in the rejuvenation of downtowns, waterfronts, and neighbourhoods will present an illustrated lecture from his recent experience helping cities revitalize their downtown core. Cities as diverse as Toronto, Hartford, Amsterdam, New York, Boston, Montréal, Washington DC, Paris, Detroit, Saint Paul and San Juan Puerto Rico have benefited from his advocacy and passion for restoring the vitality, relevance and sustainability of the public realm in urban life.

Mr. Greenberg will be joined by local developer Jeff Paikin, past executive director of the International Village BIA Mary Pocius, Hamilton Community Foundation President & CEO Terry Cooke, and writer/architect Lloyd Alter. The panel will discuss the recent positive change in downtown Hamilton and the change they see is needed to revitalize our downtown by answering the question: What do we need to do today as citizens, business and government to ensure our city will reach its potential by 2026? What happens if we don’t?